As we enter year three of the COVID-19 pandemic and inflation rises, families face challenges navigating childcare, employment, and healthcare. These uncertainties and difficulties make it an especially important time to pay attention to the state’s budget and its impact on Illinoisans. On Wednesday, February 2, 2022, Governor J.B. Pritzker delivered his fourth proposed budget for the Fiscal Year 2023 (FY23) budget, which begins on July 1, 2022. YWCA Metropolitan Chicago applauds Governor Pritzker and his staff for laying out a budget that centers families and supports their needs.

To understand the FY23 proposed budget’s potential impact on Illinois families, it is helpful to understand how the state budget works, as well as identify highlights from the budget proposal. Key parts of the proposed budget center families and underserved communities, including increased funding for the Early Childhood Block Grant and using cannabis revenue dollars to support communities harmed by violence.

The Illinois Constitution requires the Governor to prepare and submit a state budget to the General Assembly that includes recommended spending levels for state agencies, estimated funds available, and state debt and liabilities. Legislative review of the Governor’s budget recommendations begins almost immediately with hearings before House and Senate Appropriations Committees. Appropriations Committees may adopt amendments to change the funding level recommended by the Governor. Once adopted by the Appropriations Committee, the appropriation bill moves to the full House or Senate for debate, amendments, and finally a vote for passage out of the chamber. Any changes made in either chamber must ultimately be accepted by both the House and the Senate for the bill to pass and be presented to the Governor. The Governor may reduce or veto any item of appropriations in a bill presented to him, and any items not reduced or vetoed shall become law. An item vetoed shall be returned to the chamber in which it originated and may become law by a majority vote to override the veto. The Illinois Constitution requires a simple majority vote of the General Assembly for a bill passed on or before May 31 to take effect immediately. On or after June 1, a three-fifths vote of the General Assembly is required for a bill to take effect. This means that the budget needs to be approved on or before May 31, 2022.

In Figure 1, the Governor’s proposed budget shows a $45 billion spending plan with a projected revenue of $46 billion. The FY23 budget spends about $1.6 billion less than FY22, based on updated estimates from the Governor’s Office of Management and Budget. 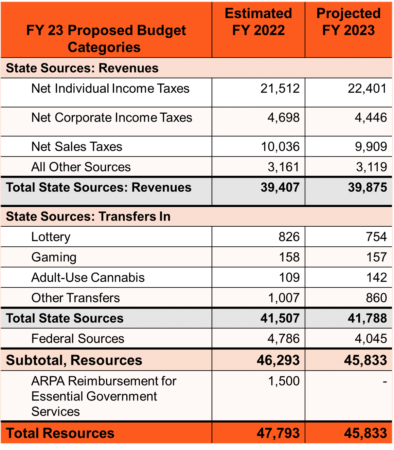 The budget includes spending in areas of growth and services, including education, public safety, and small businesses. Figure 2 (below) outlines the proposed budget’s key highlights. 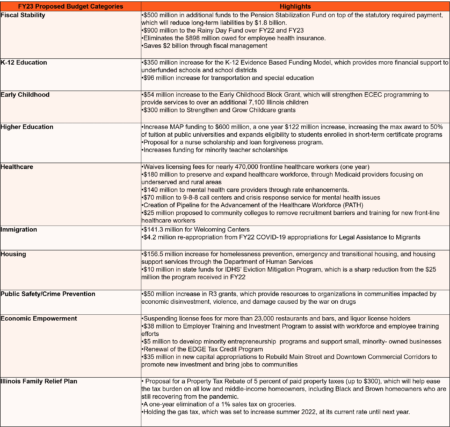 YWCA applauds this budget for centering Illinois families, especially individuals who identify as members of historically and/or presently marginalized communities. In our own work at YWCA, we will continue to support and advocate for policies that ensure budgets are designed with special attention to racial and gender equity.